Yearn Finance has been making headlines lately with the announcement of several acquisitions like Pickle Finance or SushiSwap. The Yearn team has joined its development forces with five other DeFi projects already.

To grasp what’s happening, we’ll look back at the main events since September and how each of the different sub-projects is now working to achieve a shared goal. While Yearn is still relatively new, there are already many chapters to its story.

So to better understand the latest events - the merger spree, let’s first quickly consider the three phases of Yearn’s development and how they led to today:

Last June, Yearn’s token launch was a unique moment, initiating what is now called a “fair launch”. Essentially, the YFI token was distributed over a week to users depositing to several pools related to Yearn’s products. Feel free to check my first story on Yearn to learn more about this moment.

It translated into a growing awareness for the project, a rapid price appreciation of the token, and attracted involved DeFi users to contribute to Yearn through the DAO’s discussions. The launch was so successful that it actually became a template replicated more or less successfully by many other projects: the Yearn’s waifus (forks).

Initially, Yearn was focusing on its own products, the main ones being the vaults enabling streamlined implementations of farming strategies. The vaults too grew beyond Yearn to become a product offered by many DeFi services.

The direction was not exactly clear back then. Indeed, there were many products being worked on, such as yBorrow, ySwap, yinsure, or the Eminence exploit. However, the core product, the vaults saw little improvement.

During the last few months, the vision for Yearn’s development evolved. Instead of an inward-facing plan focused on the ecosystem, the Yearn team started to look outward. At the same moment, Yearn’s DAO was structuring its processes and formalized operations fundings.

It leads to the current merger phase - joining development efforts with other DeFi projects on relevant areas of expertise. Token-wise, nothing is changed, each project keeps its own token and sovereignty over it. So let’s have a look at them.

With the context set, let’s now look at the different projects joining forces with Yearn and how they contribute to add value to the offering. We’ll consider them as they happened, in their chronological order.

Note: Some of these mergers are still pending a token holder vote to be validated.

A NFT was made to immortalize this moment of Yearn’s history: yAmong us, by Cryptouf - available on Rarible.

The “symbiotic relationship” with Pickle Finance was the first to be introduced on November 24. The idea is to merge the efforts of the two projects currently offering similar products. Pickle will now deliver an incentive mechanism on top of the Yearn vaults through gauges, similar to Curve’s current model.

1/ We are pleased to announce that Yearn has formed a symbiotic relationship with @picklefinance.

You can read more information in the Medium & governance posts below. https://t.co/xR8HYp4V58https://t.co/WMG6l2GLdw

By joining forces, it creates additional options for Yearn vaults depositors while securing the assets deposited in the Pickle jars, one of which was subject to a $20 million exploit shortly before the merge.

The merger with Cream is even more exciting as it would expand the range of strategies Yearn vaults could use. Cream is a lending platform, a fork of Compound with several changes including the collateral accepted. yUSD (Yearn yCRV vault share) has been supported as collateral for a few months already.

The two teams teaming up mean a more systematic approach, eventually paving the way for leveraged vaults: the vault token share being used as collateral on Cream to borrow more stablecoin and increase exposure. Cream would eventually become the lending arm of the ecosystem.

More info in the announcement.

Yearn has been trying to provide coverage and insurance for its products, with projects like yInsure. So working with another project on this front is highly synergistic, since it could enable coverage for Yearn vaults while allowing the team to focus on its core offering.

We won’t expand too much into this one, as it’s very similar to Pickle. Akropolis was providing services similar to the vaults, so joining forces allow increasing TVL by creating another frontend for Yearn/Pickle while beefing up the security of Akropolis, as it too suffered an exploit for $2M

Sushi is now the second DEX by volume with roughly half ($889M) of the total value locked of Uniswap. To attract liquidity to the platform, Sushi distributes its token to the providers of liquidity on certain key pairs.

This could allow Yearn to incentivize liquidity providing for critical pairs of the Yearn ecosystem, such as a CRV <> yyveCRV to drive deposit into this vault which can provide additional returns for other Yearn deposits on Curve. The team joins efforts so that Sushi/0xMaki can lead the AMM efforts amongst the ecosystem.

We are pleased to announce that @SushiSwap has joined the Yearn ecosystem.

SushiSwap under the guidance of @0xMaki will represent Yearn's AMM arm. In addition, SushiSwap will serve as the launchpad for Deriswap.

What does it mean for Yearn?

While this merger spree is a massive increase in Yearn’s firepower, it’s also a form of recentering: some key parts of the ecosystem are delegated, such as the AMM (swaps) to Sushiswap’s team, or the lending markets to Cream. It should enable the team to move faster on its core products.

There are now so many mergers announced that CoinGecko created a category to track them: 🦎YFI Partnerships & Mergers Coins by Market Capitalization.

In DeFi, composability is key and Yearn is yet another demonstration of what it can achieve. Indeed, there is one last dimension to stress with these mergers: liquidity. 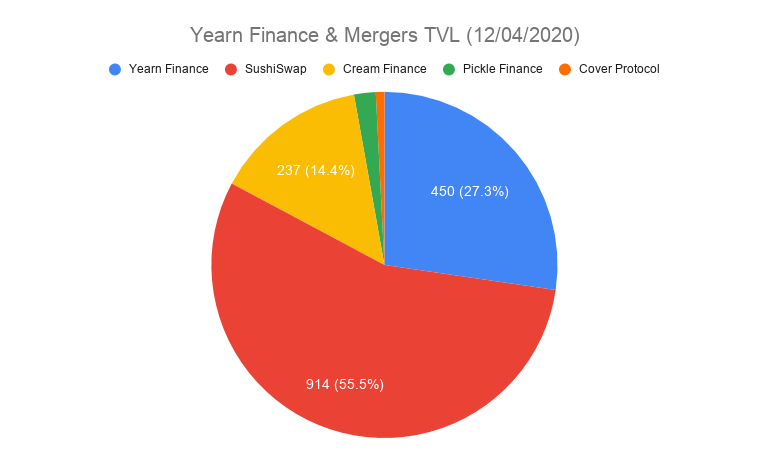 ◎ Overview of the mergers in terms of TVL, expressed in millions of $

With these 5 acquisitions, Yearn will roughly triple its total value of assets locked across its ecosystem. Along with the synergies, it could help Yearn develop a moat that will be hard to beat:

DCInvestor expresses it better that I would do:

Why is the Yearn / $YFI vertically-integrated model interesting?

Because the success of DeFi apps relies on liquidity. If you have it, your services tend to be more useful for users.

And Yearn will likely be one of the biggest liquidity funnels in DeFi for some time to come.