Distributed networks: bane of the media and will of the people? 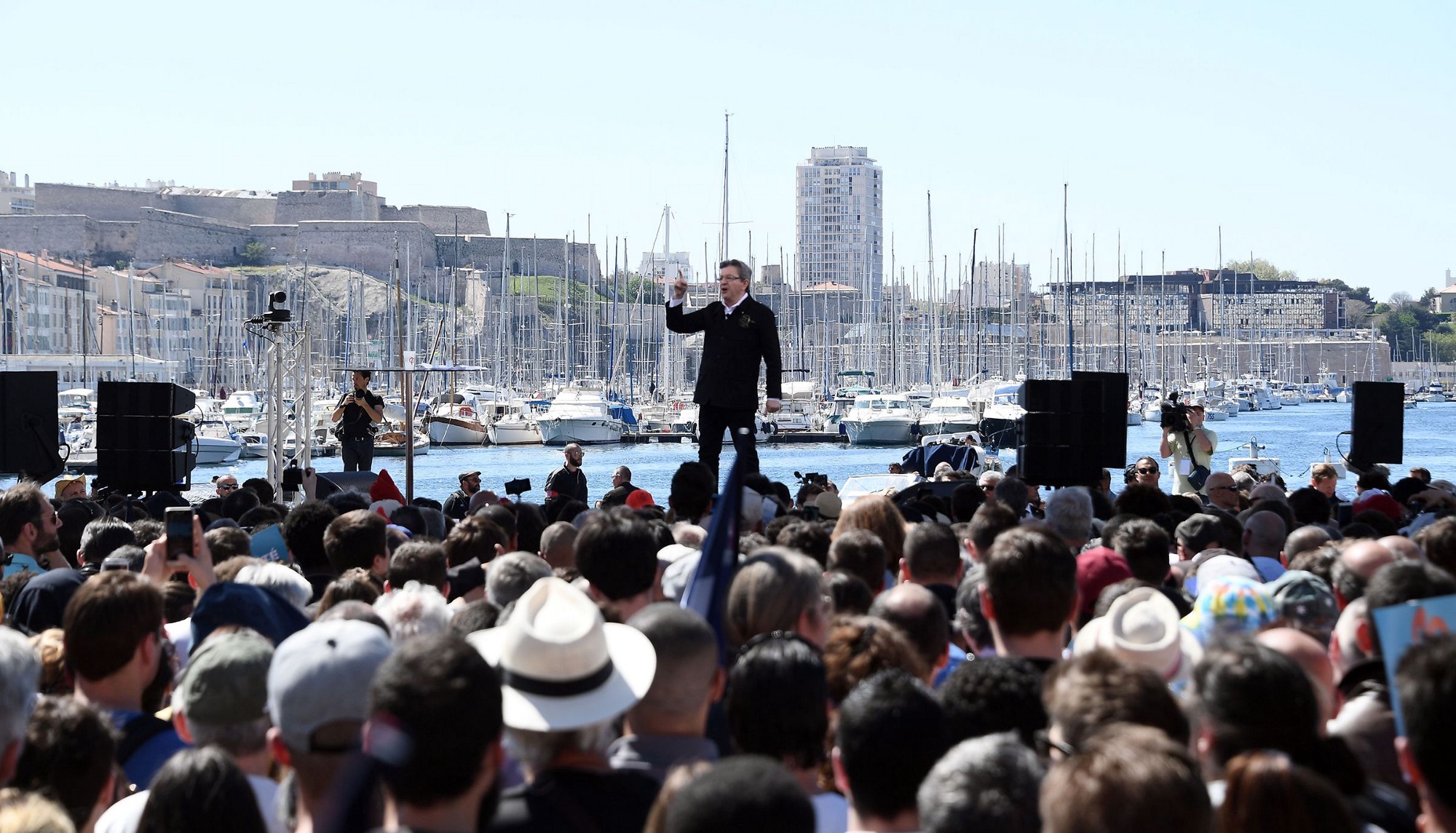 A tidal wave is rising in France: Mélenchon is federating more and more behind his candidacy every day. His novel approach is threatening the current crooked order of political affairs and medias are strongly reacting to his popularity.

Last week, I wrote my first article about distributed networks and the impact they will have in the organization of political affairs. It was built on examples taken from the French and US political life. This week, I want to focus on the state of French political affairs exclusively.

The timing is particularly relevant, with the first round of the French presidential election occurring next Sunday (04/23). The campaign has been surprisingly dynamic, although affairs and corruption scandals occupied much of the media space, especially at the beginning.

A legal framework biased towards candidates of the main parties

French presidential elections abide to 55 years old rules (the Fifth Republic) that greatly limits the emergence of alternatives candidates. Indeed, a candidate needs a collect 500 signatures from elected representatives: it’s a piece of cake for candidates of the main political parties but it can be troublesome for candidates who benefit from less media coverage or take controversial stances.

Moreover, we have rules governing the media exposure of presidential candidates during the campaign. Essentially, three phases of the elections are distinguished. Source: Conseil Supérieur de l’Audiovisuel (CSA) (in French), France’s equivalent of the Federal Communications Commission(FCC):

During the first phase (02/01/2017 to 03/20/2017), a principle of “equity” between each potential candidate is applied. Equity of coverage is partly based on the results of the candidates at the previous elections, which heavily skews the coverage of the political debate towards actors from the main political parties (Les Republicains — LR, Parti Socialiste — PS et Front National — FN).

After March 20th (when official candidatures are validated — those which successively went through the signature process described above) the same biased equity principle was applied to the official candidates.

Finally, from April 10th to the second round (05/07) a “strict” equality of media coverage is supposedly applied. Yet, media coverage is still heavily skewed towards main candidates: TV and radio channels deploy bypass strategies, such as covering “small candidates” during nighttime or off-peak hours.

Which leads to an even more twisted reality of coverage 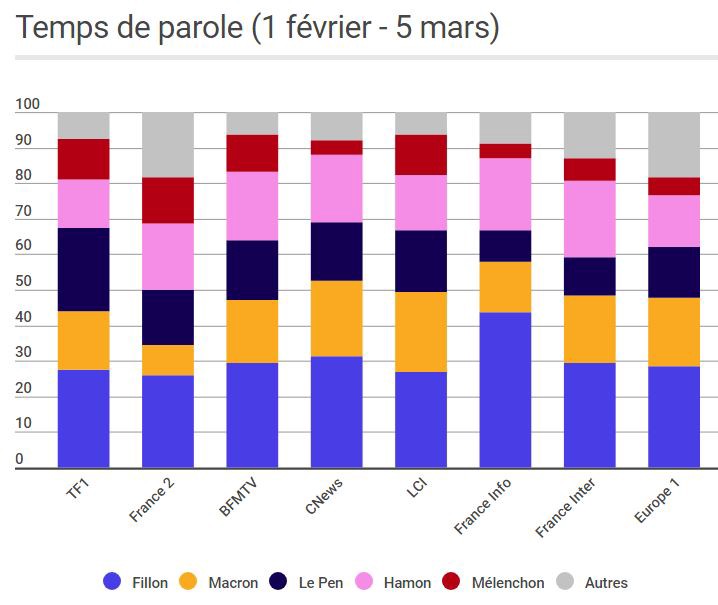 The reality of media coverage (illustrated in the chart above) is extremely biased to the benefits of Fillon, Lepen, Hamon and possibly Macron. At the beginning of March, Hamon benefited from roughly three times the media coverage of Mélenchon, for an almost equal share of the voters’ intention. At the same time, for approximatively twice the voting intention of Mélenchon**, Fillion was receiving roughly five times his coverage.**

We have eleven candidates for this election, yet most of them, the “small” candidates did not benefit from any real coverage outside of the unique debate where all were invited.

If you go around in the streets of Paris and ask random passerby who are the candidates, most of them will only answer you back with the 5 main ones: Fillon, Hamon, Lepen, Macron and Mélenchon. These 6 others are almost forgotten already: Cheminade, Arthaud, Lassale, Dupont-Aignan, Poutou and Asselineau.

Yet, we French are seriously concerned about politics and read a lot about it: the issue is about what we read. Indeed, France’s media ownership situation is very much alike to most developed countries: a handful (10 individuals own around 90% of the media coverage) of wealthy individuals own most of the outlets. One of the few respectable newspaper in France, Le Monde Diplomatique, publishes an infographic presenting the situation every year: 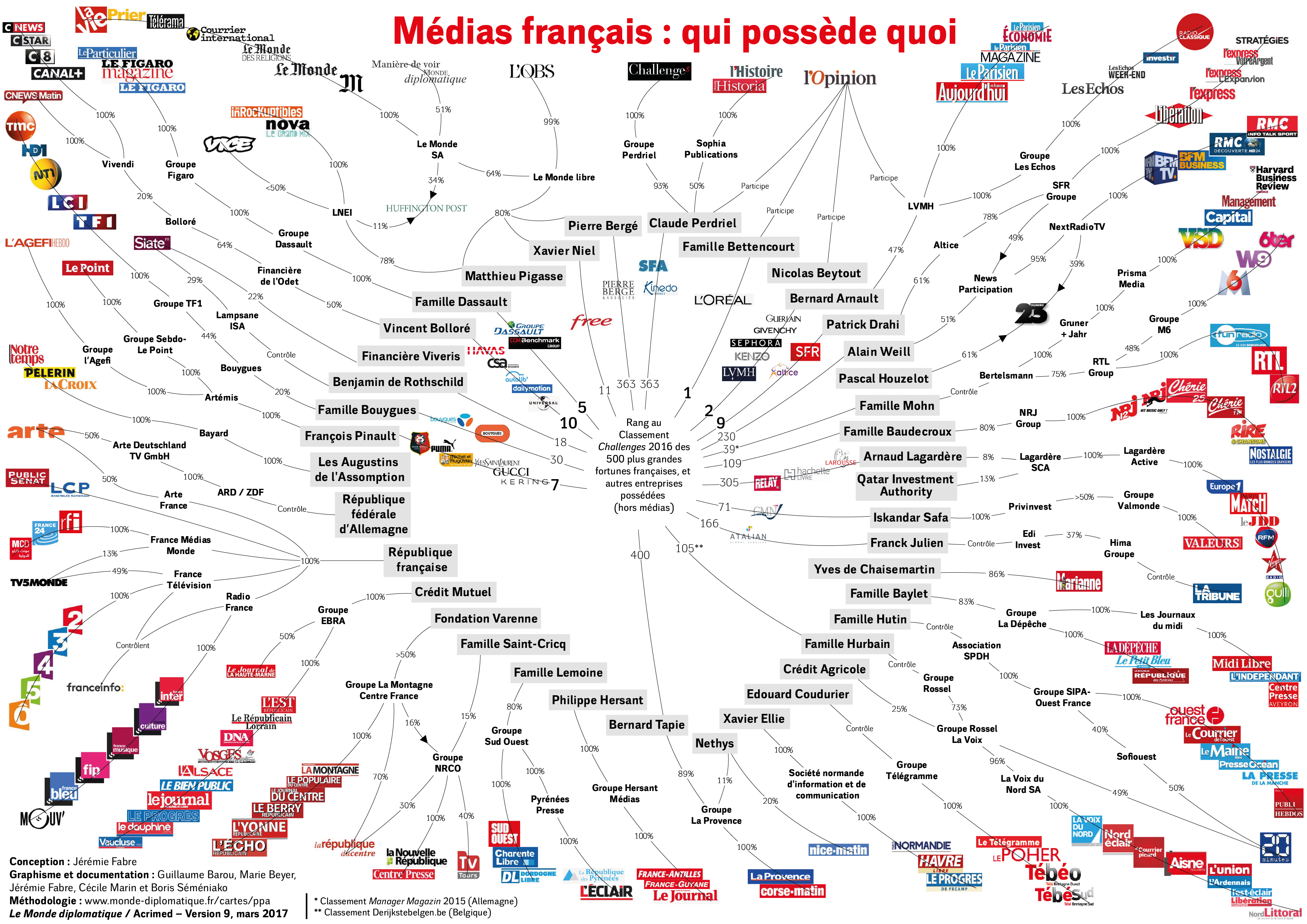 The one standing out the crowd: the fight for a the 6th republic

Out of the eleven candidates, only one is offering a real alternative to the current political dead-end and his chances of becoming president and making it happen are increasing every day: Jean-Luc Mélenchon. He is carried by an immense popular, self-organized and spontaneous group which calls itself “les insoumis”. I presented one of their realization — the Mélenphone — in my previous article addressing the emergence of distributed networks in politic.

I won’t go into the depths of his program, but only detail one particular initiative that illustrate his thorough understanding of the current situation: his wish to renew our current political system with the implementation of a sixth republic.

The renewal embodied in this 6th republic is more about the overall approach to the way political decisions are made than specific measures: the driving idea is to give to the people more control and more way to express themselves about the decision process.

More than the 6th republic itself**, the way his program envisions his origin echoes to the birth of the French democracy: a constituent assembly, made of regular citizens** will be in charge of establishing and writing the new constitution that will become the legal foundation of the new republic.

Mélenchon emerged as a credible alternative to the current political failure, despite the unanimous barrage raised by the medias against him; we’ll dive in more depth in this issue below. Indeed, Mélenchon was an important actor of the previous presidential election already (11.1 % of the vote) and he grew tremendously. In 2012, he was rightly perceived as an angry man. Since then, his stance soothed and evolved to a much more crowd-empowering approach.

One episode taken from his meeting in Marseille perfectly demonstrates this new stance. The crowd started shouting “Mélenchon President!” repeatedly. He stopped them right away:

“Stop it! I don’t want my name to become a tagline. Free yourself from this obsession. You are no devouts, you are carrying a program, l’Avenir en Commun.” [literally “The Shared Future”, the name of Mélenchon’s program]

You won’t see other candidates doing the same. On the one hand, Macron pretend to blush in the same situation while Fillon, imbued of himself just appreciate the moment. On the other hand, poor Hamon now credited with less than 7% of the voters’ intention just don’t see it happens anymore.

While Hamon (PS) is proposing a program that can seem close to Mélenchon’s on some positions, he won’t withdraw himself for two main reasons:

The first is a sheer lack of political courage. Despite behind betrayed by most of his party (Parti Socialiste — PS) which now supports Macron including the current first minister Manuel Valls, and minister of Defense Jean-Yves le Drian and despite the terrible situation at the PS, Hamon will stay true to his disloyal party to the end.

President Hollande didn’t take any stance so far which can seem surprising. Personal hunch: he’s just waiting for the best time (probably after the first round) to add another betrayal to the long list of the PS and announce his support to Macron’s candidature.

The second reason and probably main one comes from, once again, our skewed legislation: parties are reimbursed their campaigns expenses only if they gather at least 5% of the popular vote. If Hamon withdraw himself from the campaign, the Parti Socialiste will go bankrupt.

According to the NGOs for the development aid Action Against Hunger, Action santé mondiale, CARE France and ONE Campaign, Jean-Luc Mélenchon is the candidate in the presidential election who is the most engaged regarding international solidarity. He vigorously denounces free trade between France and the United States as an example of global exploitation.

Moreover, he’s aware of the emergency of climate change and is the only candidate willing to act upon it. He advanced numerous propositions to that end but once again the answer will come straight from the people, because we, French are well aware of what needs to be done.

He wants more fiscal justice, a review of the European treaties to put an end to “austerity policies”, and a new ecological order which would see France drop nuclear power.

A unique way to talk about politics

The ideas promoted by Mélenchon are welcomed: although they have been expressed since a long time by diverse actors of the French political life, it’s the first time we see a candidate with serious chances of victory propose them all. Nevertheless, what got him to his place is not only his idea, it’s his new approach to politics.

He’s the first candidate to use YouTube for his campaign: since his success others have tried to reproduce it. Instead of producing short, fast-paced videos — supposedly what works on YouTube — he takes 25 to 30 minutes every week for a review. Sitting in front the camera, he goes back on the main subjects of the week and offers a fresh and well-documented perspective on each of them. With close to 300 000 subscribers, he’s now the most successful French politicians on the network. 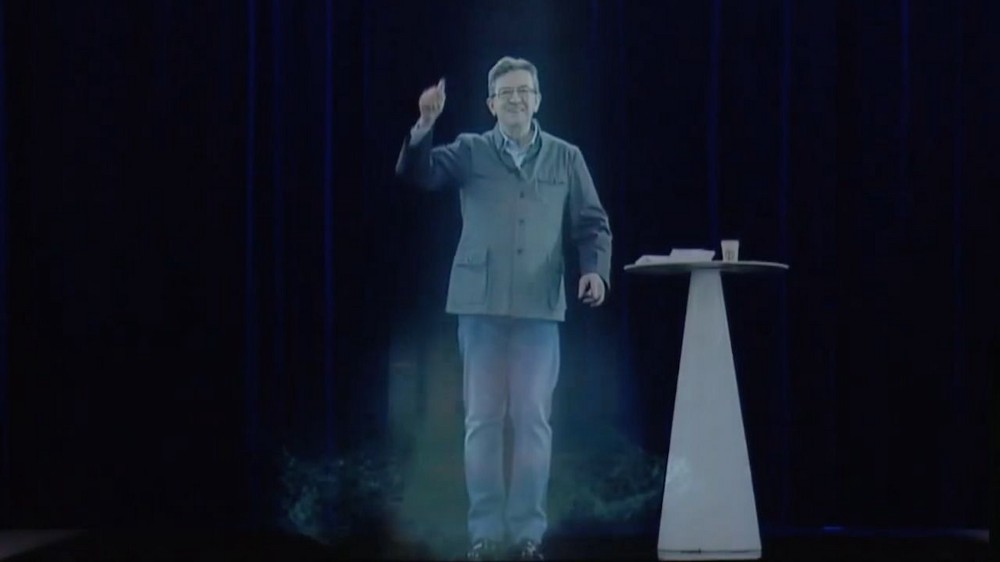 Besides, his meetings are hugely successful: he keeps the presentation short, below the 90 minutes’ mark and always addresses different topic. During the last one, which occurred this Sunday at Toulouse in the South of France, he addressed the situation in French Guiana which recently became an important topic in the campaign. Moreover, the organization is carefully planned and relies and an innovative approach. Mélenchon sometimes presents simultaneously in the multiple cities thanks to holograms.

A shift in voters’ intention

His fresh but pragmatic look at our political situation combined with his smart usage of new formats and ways to present himself created a potent dynamic in the polls. Even though polls they tend to underestimate candidates not coming from the main parties (PS, LR and FN), they are starting to acknowledge the support for his candidacy.

Depuis1958.fr is a website which takes into accounts every poll, pondered with a confidence indicator corresponding the spread between polling institutions’ previous estimations for the precedent elections and the actual results. It effectively produces an “average of all polls”. 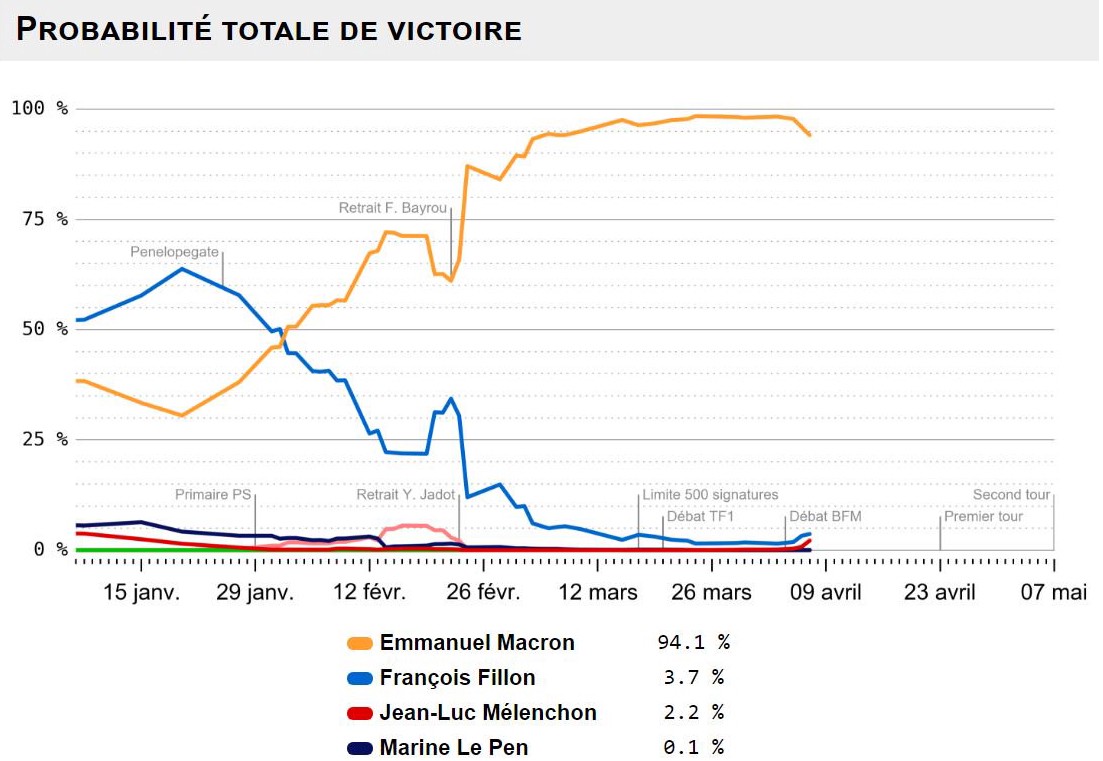 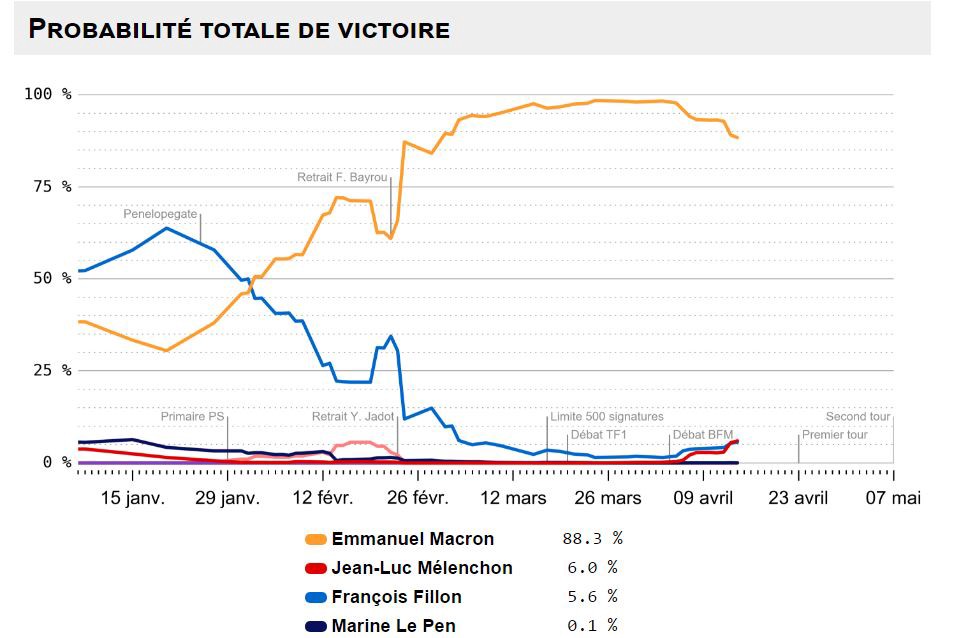 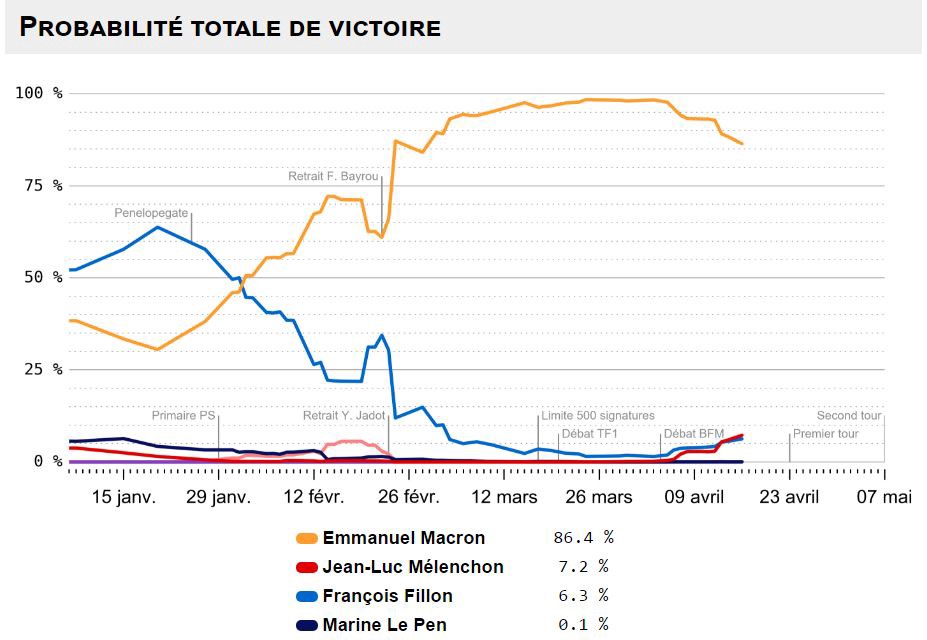 The dynamic is clear. Mélenchon is on the rise and mainstream medias started shivering.

I talked earlier about Mélenchon’s presence on YouTube, let’s see a concrete example. He made a 5 and half hours live stream about his program to present a detailed accounting of it.

Mélenchon’s live stream presenting the budget of his program

While he published the video more than a month ago, medias completely ignored it at first. Now that he’s gaining traction, they are giving a closer look at the books. One of the main angle used to attack him can be summed up as the following: “banks and financial institutions say that he’ll ruin the country”. Indeed, banks are not seeing with a welcoming eye the rise of the only candidate who gets real about fighting fiscal fraud and evasion.

Diverse strategies are used to fragilize his candidacy down to the most dishonest — smearing: some medias are trying to depict him as a socialist-dictator, like Chavez or Castro. The cover of the digital edition of “Le Figaro” (a French right-leaning newspaper) from April the 13rdis particularly insightful on the matter: 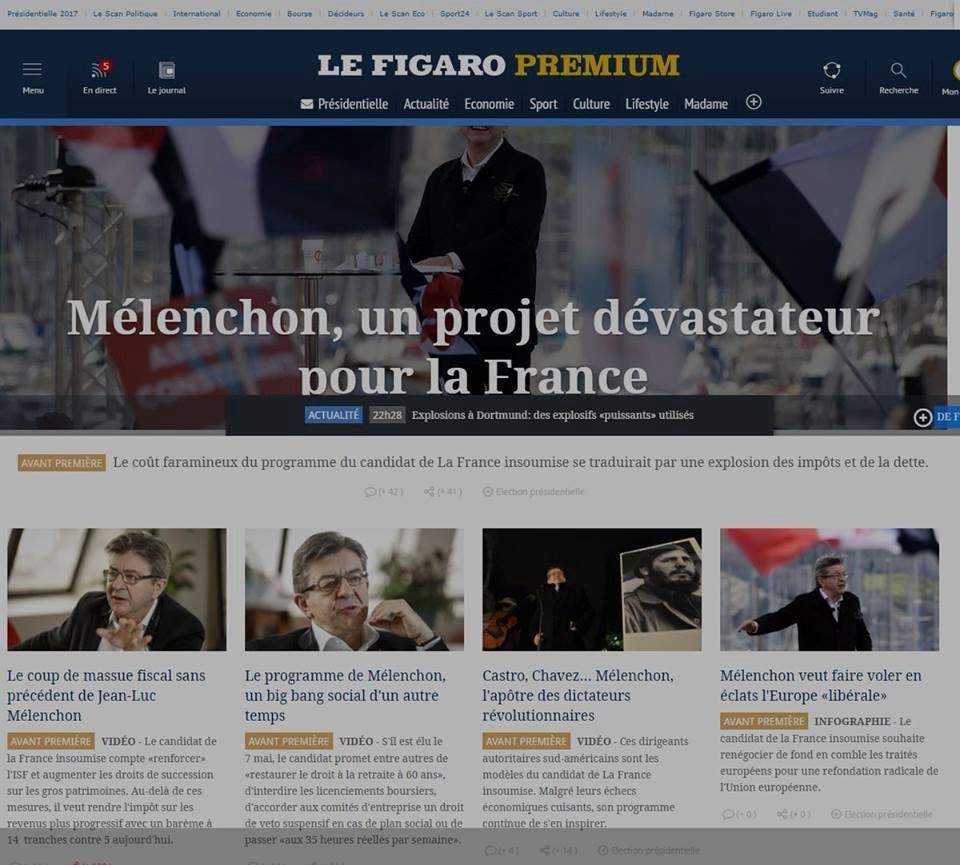 Here are the translations of the headlines:

Mélenchon, a devastating project for France

The fiscal blow without equal of Mélenchon

Mélenchon’s program, a social big-bang from another age

What the media panic means for Mélenchon’s candidacy

The amount of disinformation is staggering, yet not media is calling bullshit because all of them are doing it. The panic of mainstream newspaper, radio and TV channels might, in the end, be a good sign.

Indeed, considering who owns them, seeing them react so strongly to Mélenchon’s candidacy demonstrates that he is a serious threat to their owners: the few and extremely wealthy neoliberalist individuals: Mathieu Pigasse, Xavier Niel, Pierre Bergé, Bernard Arnault, Patrick Drahi, Vincent Bolloré, Benjamin de Rothschild, Serge Dassault, François Pinault the Bouygues family… People who are the most afraid of him are the biggest proponent of neoliberalism.

In my previous and first article, I discussed how distributed networks could be the key to free us from neoliberalism. The candidacy of Jean-Luc Mélénchon, heavily supported by diverse organizations effectively functioning as distributed network is an actualization of this thesis.

I welcome the panic of our corrupted medias with comfort and confidence: it’s a sign they’re about to become a thing of the past.