Are distributed networks the key to free us from neo-liberalism? 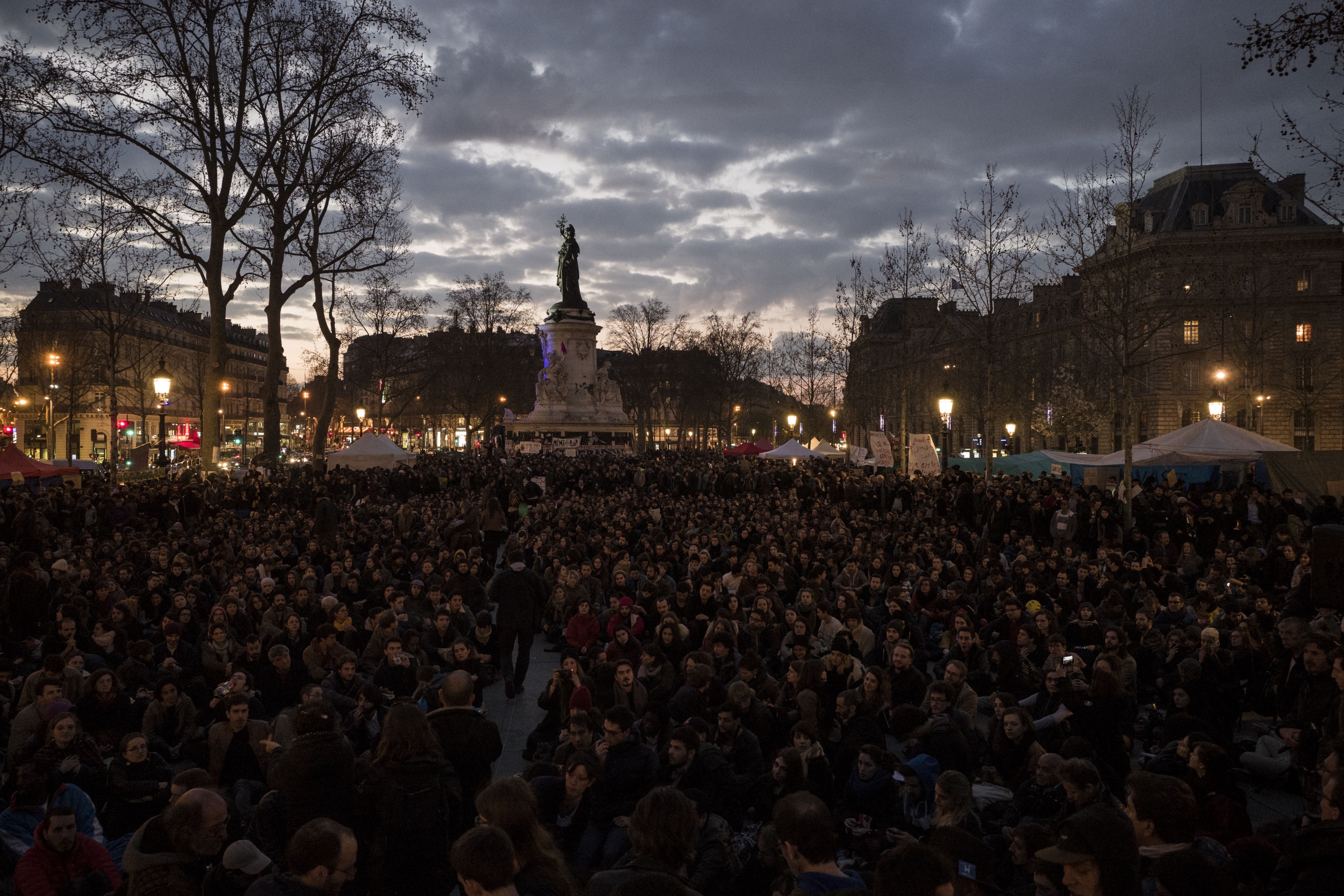 From a reflection on the effectiveness of the grassroots campaign in the United States to the current state of political affairs in France, this article discusses the recent changes that occurred in the political life in both countries and what they mean for the future.

Here in France, the two campaigns of Obama appeared like logical successes. Indeed, in our medias, the campaigns seemed straightforward: the media diffused an image of an eloquent and confident Obama, galvanizing crowds. However, the reality of what brought Obama to power is completely different according to Lex Paulson who took part in the campaigns.

In his view, the main advantage of Obama’s platform, what brought him to success, lied in the volunteers and their organization. The key to the positive voter turnout for Obama in 2008 were the thoroughly organized and very motivated volunteers that lead an effective door-to-door grassroots campaign. Even if large meetings attract the press coverage, the actual persuasion of undecided voters mostly happens when they are talking, face-to-face, to a volunteer. 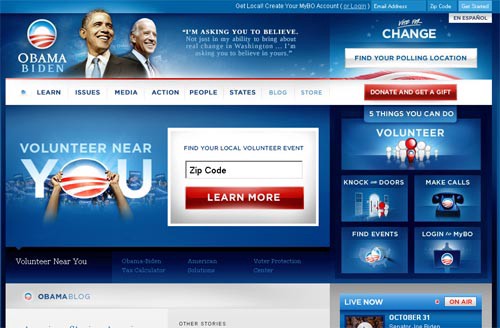 Everything besides this, such as the campaign’s website or social medias were conceived to get people involved in the campaign — fuel the grassroots movement. A quick look at Obama’s 2008 website makes it crystal clear: at the top right, one of the most prominent section of the page, there is a box to help potential voters find the closest polling station to their home. Then, just below, the goal is to get people involved in the movement by proposing them five different ways to mobilize. Finally, the left part of the body is here to help viewers find volunteer events near them. The website also had a personal workspace for volunteers with a gamified approach to foster volunteers’ motivation.

There is no mystery to this for Lex Paulson. Indeed, according to the data collected during Obama’s 2008 campaign, it takes 189 emails, 35 calls but only 15 doors knocked to convince a new voter. Moreover, because of the very permissive data collection laws in the US, door-to-door campaigns can be precisely optimized to focus the resources on the voters most likely to be persuaded by Obama’s message and program. Therefore, the allocation of resource in this campaign was focused on being the most efficient as possible: technology was used to amplify and accelerate face-to-face, door-to-door actions.

Obama benefited from a very large and highly motivated volunteers base. To galvanize the base, the candidate’s attitude is essential: he sets the tone. While Obama managed to put his volunteers first, and made them feel valued, Clinton failed this in 2016. In Lex’s perspective, that’s the main reason of her defeat: she failed to organize and motivate her community well enough. Commitment from the base is necessary for it to scale up and branch out. 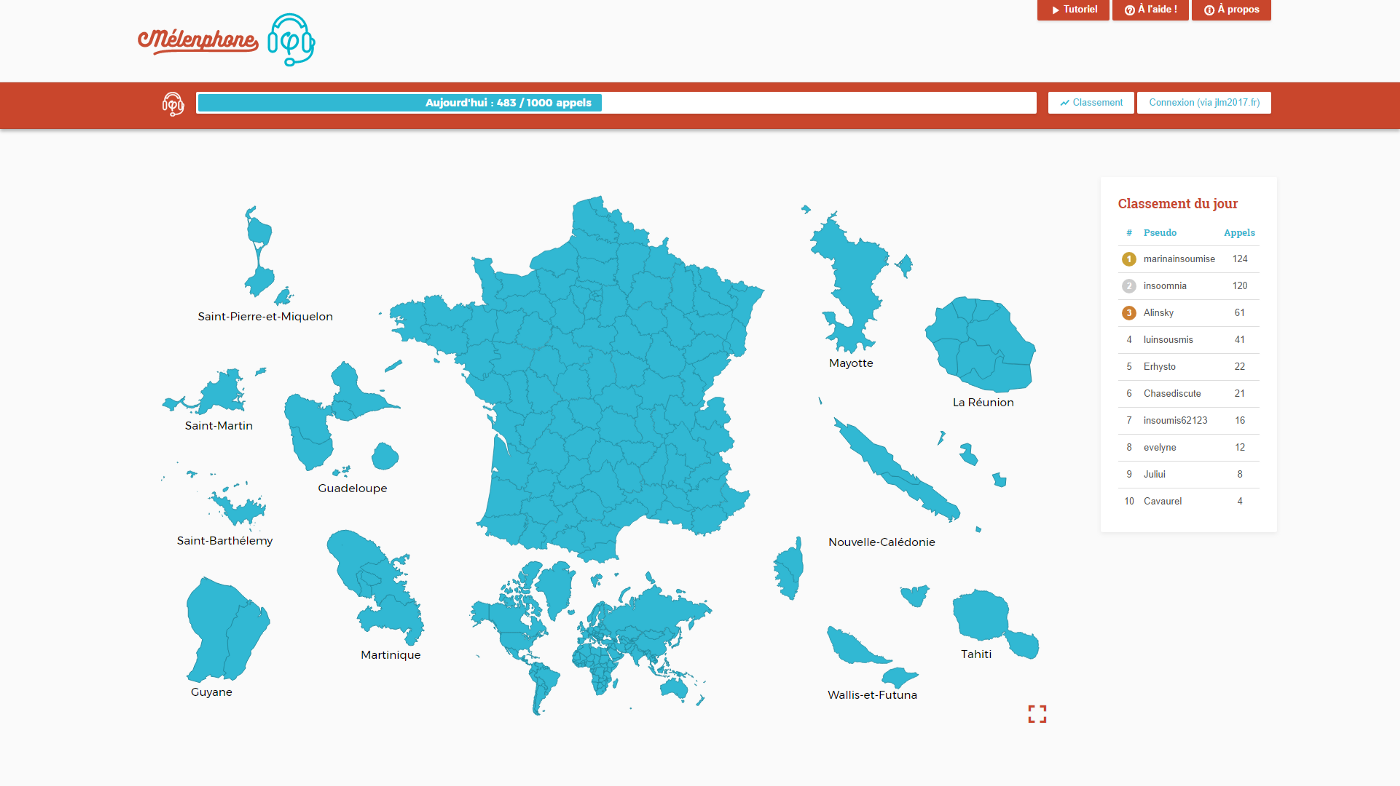 Formal politics, a remnant of the past?

Nowadays, there is a sharp decline in participation in formal politics such as parties, media or labor movement. We tend to see parties as a necessary element in our democracies. In some extent, it’s true: for more than a hundred and fifty years, the power in the US has alternated between the Democrats and Republican. Nevertheless, political parties are, on the long-scale, a recent creation. They emerged around the 18th century because of the need to organize at an unprecedented scale. It’s necessary to put political parties back in their context and acknowledge them for what they are: a specific historical response to a historical moment. Now may be the time where the underlying parameters of our political life changed so much than parties became unnecessary.

The 2017 French election is particularly striking in the matter: the former two main parties are dislocating. In the latest polls, the three leading candidates are originating from a party that never won a presidential office before: Marine Le Pen (“Front National” — 23%), Emmanuel Macron (“En Marche” — 23%) and Jean-Luc Mélenchon (“France Insoumise” — 19%). The “Parti Socialiste” (left-oriented, the party of Francois Hollande) is credited with less than 10% of the voters’ intention to vote, while “Les Républicains” (right-oriented, the party of Nicolas Sarkozy) is at 19%. Moreover, out of the three leading candidates, two are not running with the support of a party but a political movement, a platform created just for this election: “En Marche” (Macron) et “France Insoumise” (Melenchon).

People are more and more frustrated with politics in its traditional sense; they are looking for new ways to engage themselves. Among these are decentralized and distributed movements regrouping people fighting for the same cause: in France, there was la “Manif Pour Tous”, a traditional and family-oriented movement originated from the right-wing of the political spectrum to oppose the gay-marriage law in 2013. More recently, and more known internationally, we had “Nuit Debout”, a horizontally-structured, leaderless social movement that arose in 2016 in the wake of the protests against Elkomri Law, a liberal-oriented labor reform. 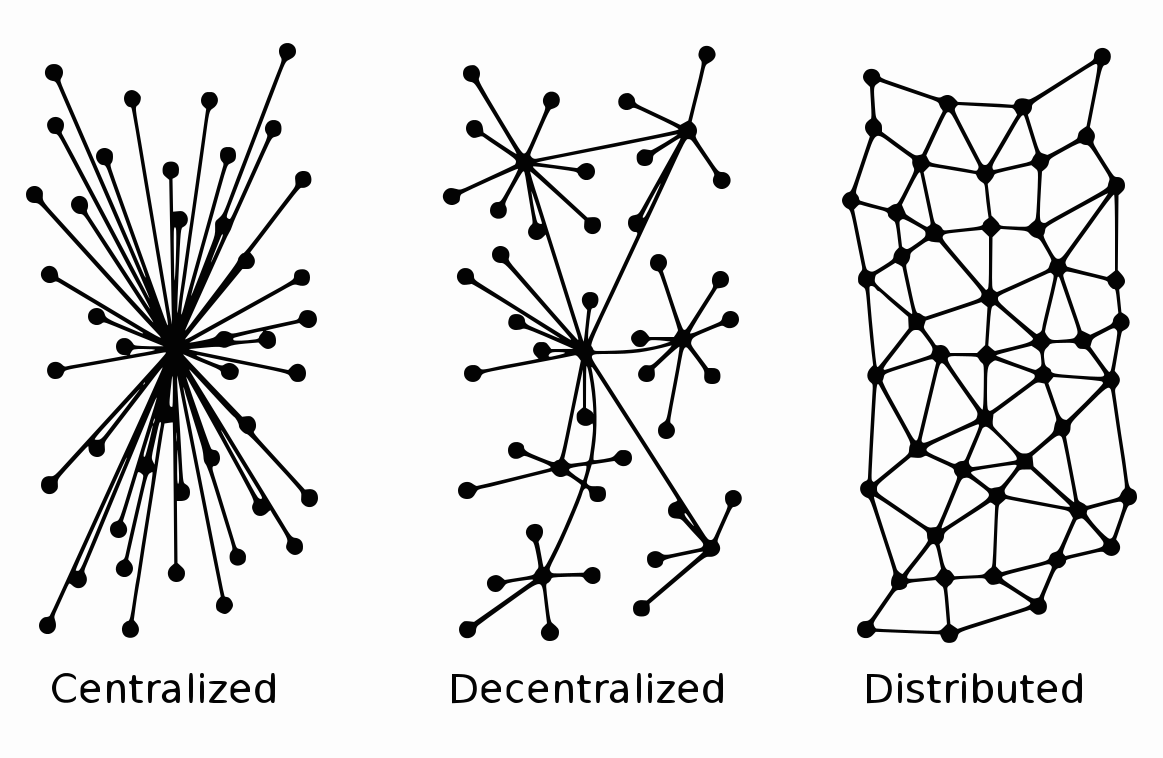 Whether it’s made of wires or people, a network works the same way

To grasp a better understanding of what is happening, Lex invite us, once again to go back to the roots: what are networks and what are the main ways to structure them? To that end, the work a Paul Baran, a pioneer in the development of computers networks, is particularly insightful.

In the early 60s, Paul started reflecting upon how to make communications network more resilient to attacks. He defined three types of networks:

He illustrates the applicability of this model to politics with three examples taken from classic history.

Out of the three, distributed networks, even though they are harder to organize and maintain presents two main advantages. Firstly, they are more resilient: it was the main objective of Paul Baran’s research. Secondly, they are the most efficient at harnessing the wisdom of the crowds.

The crowd’s secret: the need for horizontally organized networks

To understand the power of the crowds, James Surowiecki’s work is enlightening. In The Wisdom of Crowds, he demonstrates the efficiency of decentralized networks:

Decentralization is the key to better diversity, independence, and appropriateness of judgments. Aggregation of information, but even more of judgment is paradoxically important to the success of decentralization. If the aggregation process creates biased filters, then the effect is lost.

The Bean Jar experiment is particularly interesting to comprehend what it means: a large number of beans are put in a jar. A large number of individuals are then asked to rapidly guess the number of beans in the jar. In Jack L. Treynor’s realization, he did a run with 56 students for a 850 beans jar. He obtained very diverse values, some of which were extreme. Nevertheless, the average of the 56 responses collected is very close to the actual value: 871. Out of the 56 answers, only one individual answer is closer to the truth. Doing re-run of the experiment, he noticed every time a few student producing very accurate number, but those were never originating from the same student.

Here lies the Bean Jar experiment’s first insight: not only a crowd of independent individuals, when averaged can reach a very accurate estimate, it can do so consistently. When properly organized and averaged (all at the same coefficient) the crowd is consistently reaching the most realistic estimation.

Harnessing crowds’ power: the needs for collective intelligence to emerge

The Bean Jar experiment is insightful to understand the interest of the wisdom of the crowds but once this interest is perceived, it instantly ignites another question: the experiment happens in a fixed environment, with numerical guesses that are then averaged. How to reproduce these conditions in real-life situations and reach a truthful “average of opinions”?

To answer this question takes us back to Lex Paulson’s work. He identified four main needs for collective intelligence to emerge:

Distributed network: the spontaneous emergence of a new node

Let’s take another example for the French 2017 Presidential Campaign to demonstrate what the crowds can do once given the freedom and control. Supporters of Jean-Luc Mélenchon, “Insoumis” or not, are organizing their efforts everyday using the messaging app Discord. Among their many actions to help their candidate, they organize a continuous monitoring of the discussion of social networks regarding the campaign and intervene if needed.

Yet, the most remarkable achievement is a project now used and promoted by Melenchon’s campaign team that was thought of, designed and realized by the Discord Insoumis community. The tool, called the “Melenphone” is a website made to coordinate the calling efforts of the Insoumis. A support channel was created on the chat to help the users get started with the tool, as well as video tutorials on Youtube.

The interface is gamified, with a daily objective of calls and daily top caller ranking on the homepage. Another dedicated page display the top weekly, monthly and all timer callers. The project is a tremendous success with more than 26 000 calls already dialed using the platform.

It’s too soon to talk about the result of the Melenphone, but the team is optimistic. The existence of this project, and its development is a perfect example of what a distributed network is: when there are no central controlling instance, a new node can appear at any time and plug himself to the network, just like the Discord Insoumis community did.

To make the most of the volunteers’ work, the campaign team must listen to what the volunteers have to say: they are the ears of the campaign. Obama’s team understood that and rigorously debriefed their door-to-door campaigns. Volunteers were invited after each operation to an interview in a cozy and relaxed environment to talk about their experience.

Because the organization had an efficient upward data stream, with insights from the volunteer flowing back to the campaign’s organization team, they were able to continuously iterate and fine-tune the message. The leadership status of the candidate emerged over iterations from the data collected on the field.

Is door-to-door efficiency specific to the US?

Lex is now working with the En Marche team, trying to bring his unique insight from the US campaigns to improve the processes of the movement. My personal hunch is that his approach will need significant adaptations to land positive results in France.

First and foremost, thankfully, our data-collection laws are still more restrictive than in the US. This makes the door-to-door campaigns much harder to optimize. Moreover, as he duly noted during his presentation, French are much more involved in politics: not only we read a lot about it, but it’s also one of our main discussion topics, not bounded by the limits of our relatively short presidential campaigns. Despite the low fidelity of our previous presidents to their electoral program, we still read them with attention.

However smart and fine-tuned the platform behind Macron is, his timid and conservative program might lead to his failure. In wake of the downfall of formal politics, discussed in this article, French and Americans (as Bernie Sanders’ popularly proved) are now looking for an ambitious alternative to the stagnation and the immense deception embodied in the succession of Sarkozy’s and Holland’s presidencies (or Hillary Clinton’s candidature).

Call me optimistic if you may, but I think the world is finally ready for the shakedown. Will it start from France, or will once again, the will of the people be silenced until it finally emerges later on, elsewhere?

So who is this Lex guy?

Lex Paulson is a lecturer in Rhetoric and Political Thought at Sciences Po. He took part in the organization of four presidential campaigns in the US including Obama’s two successful runs.

This article was inspired by a conference he gave at the Dojo Club in Paris, “Collective Intelligence and Automation in Politics” completed with personal research.

I want to thank him once again for the stimulating presentation.

Let me know if you liked this article and check out my wiki for more content like this. Don’t forget to clap it to help it spread: you can keep pressing 👏up to 50 claps.